It was a dark and stormy rehearsal … The toga party was winding down, as there were no more clean sheets. The boys put down their instruments, being weary from too much sexual fantasy and a lack of alcohol. Someone suggested it would be keen to go down to the local New England pizzeria, stand outside the window, and beg for crusts. It was Larry who made the bold statement that, maybe this time, his head awash with visions of shredded mouse meat, they should go inside and order something … a 'snake grinder' … no, wait … he meant to say 'steak grinder'. Too late. The mispronunciation hung in the air like yesterday's shrimp shells. The band was born!

- From the pulp fiction novel, Pajamas Optional, by Rondo Tutbalm

For two weeks before their first gig as The Larry Adams Band at the Rockford Park music festival on August 15th, 1970, the hastily assembled group of Larry, Steve Roberts, George Christie, John DiGiovanni, and Dave Bennett, labored to electrify 5 or 6 folky-type tunes in order to present them to an audience that was pretty much beyond the folk movement of the 60's. After all, it was now the 70's, exactly one year beyond Woodstock!

Larry, Steve, George, and John had recently emigrated from a failed musical adventure known as George's Lunch (Take us out or eat us here!). Dave was found at Eat At Joes, a high school coffee house in a Newark church basement, where Larry and Steve had attempted a Hot Tuna-type set. The band he was in, Pump Productions, had recently dissolved, as well.

The debut at Rockford Park was unspectacularly OK. However, after the band dragged their gear from the stage, stowed it in their vehicles and went back to being members of the audience, one of the cars was broken into and all of George Christie's stuff was stolen. As everyone was too poor to own spare equipment, George was now, by default, out of the band. The performance that really got the audience truckin' down the aisles that day, "Singin' doo-dah, doo-dah, doo-dah", came from Primeval Slime.

Over the next 5 years, the nucleus of four, Larry, Steve, John, and Dave, saw various others come and go. Among them were Eddie Day and Tommy Eppes, from Primeval Slime. Tommy learned to play the pedal-steel, left, and came back. Poor Eddie was run over by a train

One of the band's biggest fans, George Wolkind, whom had never sung in performance, anywhere, was visited by the ghost of Eddie Day a few days after the tragedy and told George that he would take his place as lead singer of the band, in a year. As prophesied, a year after Eddie's untimely end, with no knowledge of the disembodied communication, Steve and Dave asked Mr. Wolkind to join the band as lead singer. (Now, THAT was weird!)

So by 1973, the 6 members who comprised the band most folks knew just as "Snakegrinder", finally got together. They were joined by Jon McDowell, Keeper of the Sound, and Nick Norris, business agent. Musically, the band played a mix of covers - mainly influenced by the west coast psychedelic movement, with a little South-southwest flavor - and some very idiosyncratic originals. (Many of which can be heard on the two CD set: " …and the Shredded Fieldmice", available practically nowhere!) The band's strength was their ability to improvise and jam. Coupled with their total lack of professional appearance, and their socio-political musical anarchism, they seemed to catch on with the burgeoning "alternative" community growing wild in the 70's. The band became a staple at area coffee houses, festivals, and underground shows. They were immensely popular with local Grateful Deadheads, usually drawing large crowds to the small venues they played. Bar owners weren't all that enamored of the band, however, as the crowds never seemed to drink much in spite of their jubilant dancing and frequent trips to the parking lot. Snakegrinder was also a "musician's band". Many local area artists have testified to being influenced by the band, early on in their careers. ("Yes, your honor, it was all their fault.") To their credit, there was never a paternity suit brought against any band member!

Unfortunately, the alternative community couldn't support the band monetarily, and by August of 1975, Larry was ready for a new life. He left the area and started a real career. With one of the parts missing, the band, depending entirely on the inter-personal group dynamic of the members as the engine driving the music, could not go on.

In epilogue, the band announced the release of an album, recorded at Dana Smith's Quaudio Studio in Wilmington, Delaware in 1975 and 1976, of all original tunes, at the second of their annual Christmas reunions in 1976, at the Stone Balloon. They got back together twice after that, for public performances - the last was in 1988. Let it be noted, that the original vinyl LP has become a collector's item. Mr. Alligator (their media producer) having sold an unopened copy and a used copy, several years ago to a dealer in Connecticut for $150 and $50, respectively.  A few months ago, another copy of the LP sold on eBay for $250 to a gentleman in Japan.

Larry became Dr. Adams and lived in Bristol, England for a number of years, supervising research data for the city's schools.  Musically, he's playing fiddle and involved in choral singing. He has returned.

Tommy Wayne (Eppes) has maintained a thriving career as a pedal-steel guitarist, centered in Las Vegas.

John DiGiovanni is one the best known and sought-after local drummers and drum teachers, as well as a master electrician, gigging regularly with several bands, including The John DiGiovanni Quartet and Garry Cogdell and the Complainers. He joined the great band in the sky in 2018.

George Wolkind went to Colorado to commute with the spirit world, then returned

Dave Bennett went off to join a Mexican circus, playing tuba, after which he founded The Voltags in 1979. Currently, he is on a world tour of self-discovery and is residing in the Phillipines.

Steve Roberts plays with a 4 piece improv group, Accidents Will Happen, as well as collaborating with the legendary Hangnail Phillips, (we won't mention his association with the infamous ninja beatnik poet and musipeutician, Dick Uranus.)  He is also vice-president of Inconsequential Films.

Jon McDowell, George Christie, and Steve all work together in the I.T. department of a large, local health care organization, disciplining computers.

Nick Norris successfully carried on in his management career and is the Operations Manager for CenterStaging Musical Productions' Pennsylvania facility.  - "where artists go to work… before you see them play".

To quote the liner notes from their "posthumous" album - "We really weren't sure where we were coming from and we were damn sure we didn't know where we were going… but we needed the exercise so we bought a lot of heavy equipment and hauled it around. We got high, we got down, we played some music, we loved it, we hated it, we lost money, we gained friends, and we got older." 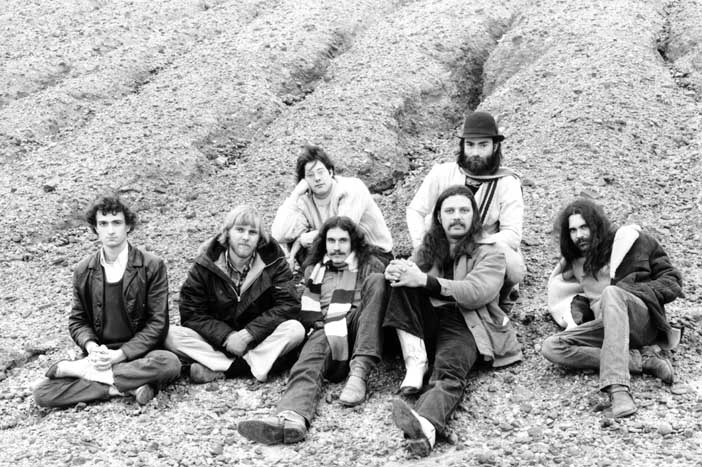